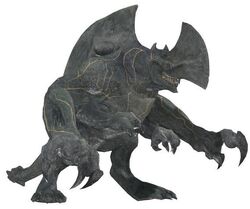 Trespasser is the name given to the first Kaiju to attack Earth through The Breach.

Trespasser is a gigantic Kaiju with a height of 300 feet and weight of 2780 tons. Trespasser has an axe shaped head and therefore is given the nickname Axehead. Trespasser had four arms, two of them with gigantic hooks on them.

Retrieved from "https://aliens.fandom.com/wiki/Trespasser?oldid=181600"
Community content is available under CC-BY-SA unless otherwise noted.