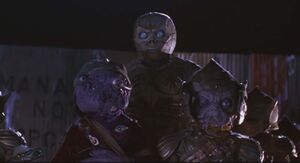 The Trelkans are a peaceful diminutive race of humanoids from the planet Trelkas.

Treklans stand about three feet tall, with two legs and two arms. They have three digits on their hands and possess magenta skin. Their bodily waste disposal occurs at the base of the front of the neck.

The planet Trelkas was attacked by the Broodwarriors, disguised as emissaries from a coalition of planets. After the invaders made landfall they systematically began destroying the planet city by city. The Trelkan government attempted to regain the cooperation of a disgruntled scientist, Tenris De-Thar to complete the Cybot project in hopes of turning the tide of the war. However the scientist refused as the Trelkan government confiscated all his work and that his people turned their backs on him. It was his intention to leave his home planet with his wife. Tragedy struck when the shuttle Tenris and his wife were in was shot down by enemy fire, crashing it on the planet leaving Tenris the only survivor. Driven by grief and revenge, Tenris returned to the Trelkan council and agreed to return to his work unless he was given absolute authority over his project. Faced with the fate of their race and world, the council accepted his demand.

The Cybot prototype was nearly finished until the Brood Warriors launched an assault on his lab. Tenris was injured but managed to activate the mechanism that would safely send his creation to Earth and out of the Brood Warriors hands. Tenris and the commanding officer, Nath, led a retrieval team to Earth seconds after the Cybot and two Earthlings dispatched the Broodwarrior sent to capture the Trelkan's weapon. They repaired the Cybot and thanked the Earthlings for their bravery, with Nath awarding one of them his badges. Its presumed that the returned to their homeworld to continue the fight against the Brood Warriors.

The Trelkans are a tiny peaceful race that were technologically advanced. Later they were forced to fight in order to defend themselves against the Broodwarrior onslaught. During a matter of great debate, the Trelkan leaders use a pink pyramid ritual to read each others minds to gain a full consensus. They also worship a group known as the Old Ones.

Retrieved from "https://aliens.fandom.com/wiki/Trelkan?oldid=168856"
Community content is available under CC-BY-SA unless otherwise noted.