Traveler of the Stars 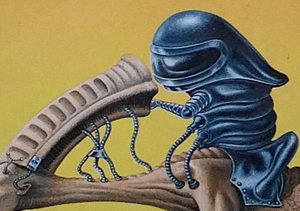 A Jimez Smoot descendant with its carrier.

Dougal Dixon
The Travelers of the Stars are a post-human species which evolved from Human colonists in the far out space. They are also referred to as Jimez Smoot's descendants.

These creature are enclosed in exoskeleton-like suits to allow them to survive on environments that are alien to them; including the homeworld of their ancestors, Earth. The appearance of the actual organism inside is not known. On Earth, they often ride a deer-looking organism descended from the temperate forest dwellers. There are small nodes attached to this organism, and it is said that it is controlled telepathically by the rider.

After Earth's environment has collapsed under Human pressure, the most perfect Human specimens were sent up into space to colonise new planets. They used the Vacuumorphs to build 37 of these spaceships.

Once these Humans left Earth, nothing is heard of them until 5 million years. It is assumed that one of the 37 spaceships that left Earth found a habitable planet and genetic changes occurred in order to live on this planet. When they reached Earth, they could no longer recognise it, since their bodies had evolved too much to deal with the environments of other planets. However, they still exploited the local species and turned them into food sources, beasts of burden and workers.

Not long after they arrived, the entirety of Earth was almost destroyed. They moved on to find another planet to exploit leaving only one surviving Homo sapiens descendant left, Piscanthropus profundus.

Retrieved from "https://aliens.fandom.com/wiki/Traveler_of_the_Stars?oldid=189184"
Community content is available under CC-BY-SA unless otherwise noted.