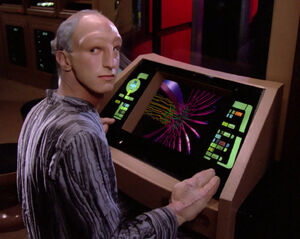 "Captain, I seek only transportation in order to see and experience your reality. I am not a threat to you, your ship or your crew."
―The Traveler, "Where No One Has Gone Before"

The "Travelers"; as they seem to identify themselves; are a sapient humanoid species from Tau Alpha C which possess the ability to travel anywhere in the universe by manipulating space and warp fields with their thoughts.

These creatures are humanoid, but can be distinguished by their hands, which have only three large fingers. However, they have demonstrated the ability to alter their own appearance to disguise themselves as other races. Their minds cannot be accessed by telepathic races such as Betazoids.

The Travelers are most notable for their mental abilities, which can easily appear supernatural to Humans as well as most other races. Travelers claim that thought is the basis of all reality, and that they can use their minds like a lens to focus their thoughts. By doing this, they can move freely throughout space, time and dimensions, and are capable of phasing in and out of reality. They even have access to a realm described as either the end or the beginning of the universe, and in which any thought might become real if the subject cannot control it.

Only one individual of this species has been encountered by Humans, as of the 24th century. Assuming this individual is a good representative of his people, the Travelers appear to be largely benign, even if they're still reclusive. They travel without destination or purpose, solely for curiosity. Additionally, their language might be very complex, as the Traveler claims that his real name is not pronounceable for Humans.

When William T. Riker asked the Traveler about why there was no record of him or others of his kind ever making contact with Humans, the Traveler responded frankly that up to that point, Humans hadn't appeared interesting enough to his race.

However, as soon as he started taking interest in the Federation, the Traveler presented himself, without revealing his abilities, but offering knowledge of propulsion systems in exchange for passage in Starfleet vessels so that he could experience "[our] reality". He became an assistant to Human engineer Kosinski, who developed formulas that would allegedly allow for much faster warp travel. Unbeknownst to anyone, Kosinski's methods didn't actually work, but he still managed to achieve results thanks to the Traveler, who deliberately took no credit.

Retrieved from "https://aliens.fandom.com/wiki/Traveler_(Star_Trek)?oldid=173960"
Community content is available under CC-BY-SA unless otherwise noted.