Alien Species
Register
Don't have an account?
Sign In
Advertisement
in: Masters of the Universe, Sapient Beings, Characters of Unknown Species,
and 8 more 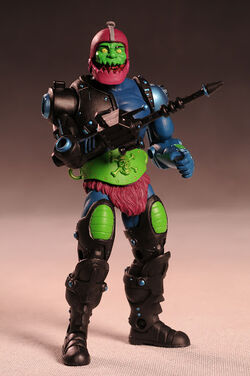 Lou Scheimer
Trap Jaw; originally known as Kronis; is a blue-skinned humanoid cyborg criminal from another dimension and a member of Skeletor's Evil Warriors who attempt to conquer Eternia.

As Kronis, he raised an army to overthrow Skeletor, but was defeated by his master and severely wounded, leading Skeletor to order Tri-Klops to rebuild him as a cyborg. Humiliated, Trap Jaw remained mostly loyal to Skeletor after this point.

As a cyborg, Trap Jaw is most well-known for his mechanical mandible and ability to bite through and eat even the hardest substances, including solid rock and metal. His mechanical right arm allows him to attach a number of weapons and gadgets to adapt to different situations. He is not known for his intellect, however, and has been often outsmarted by He-Man and other members of the Heroic Warriors.