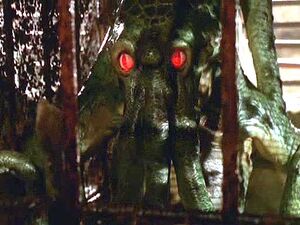 The Trao are a sapient spacefaring species of cephalopod-like creatures which make up the Consortium of Trao, a huge political entity of 10,000 planets, each inhabited by about 4 billion Trao. They're notable for their ability to resurrect beings which have been recently-deceased.

Trao are a mollusk-like species with green skin and red eyes. Their tentacles appear to have extraordinary healing properties, and it has been demonstrated that they can even resuscitate a recently-deceased being by touch.

The Consortium of Trao is presided by a single monarch, with an established line of succession to follow. They seem willing, as a species, to absorb other races into the Consortium and govern over them as well.

Trao customs appear to dictate that any person killed and resurrected by someone else should become property of the resurrector, unless rejected.

Retrieved from "https://aliens.fandom.com/wiki/Trao?oldid=132131"
Community content is available under CC-BY-SA unless otherwise noted.