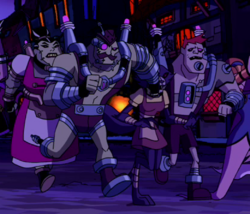 Ben 10
Transylians are an extraterrestrial species of Frankenstein's Monster-like humanoids from the planet Anur Transyl.

Transylians are a Human-like species which resemble Frankenstein's monster in the sense that they have stitches across their bodies. They also have a pair of metallic-organic generator-like growths on their backs,[1] which they gain as they age.

Transylians are capable of shooting electric bursts from either their hands or the generators on their backs that are powerful enough to harm Piscciss Premann, Arburian Pelarotas, tangible Ectonurites, and Evolved Necrofriggians. Although their bio-electricity discharge is naturally colored green,[1] it can come in other colors such as purple, blue, and grey.[2]

Transylians can survive in the vacuum of space, likely due to their undead-like nature.

Transylians possess enhanced durability, being able to withstand a hybrid Terroranchula's attacks. They are also immune to an Anodite's Mana attacks.

Transylians are immune to intense heat, such as a Pyronite's attacks and an evolved Necrofriggian's ice flames.

Transylians possess a degree of enhanced speed, enough to keep up with Appoplexians.

Like the other races in the Anur System, Transylians are immune to the effects of Corrodium and can see in the dark.[2]

Certain Transylians possess enhanced intelligence, as Viktor is considered to be the preeminent scientist of the Anur System.[2]

Despite all of their electrokinetic abilities, Transylians are incapable of absorbing electricity.[2] Additionally, they can be harmed by their own electricity.

As their generator-like growths are the source of their electricity, opponents such as a hybrid Terroranchula can absorb electricity through them.

Certain Transylians are unable to fit through small or tight spaces.

Like other organic beings, Transylians can be banished to another timeline by a Chronosapien.

Transylians can experience fear in the presence of Toepick's Species.[2]

Depending on the individual, Transylians have a myriad of personalities, though according to Viktor, they commonly share a hatred of Vladats, due to being enslaved by them and used ultimately as food in the past.

Transylians are not too friendly towards beings from outside the Anur System and view them as monsters. They are also one of several races under the command of the Ectonurites.

Transylians view anything hideously ugly as attractive. For example, Viktoria had a crush on Ben Tennyson while he developed a severe case of acne, a side-effect of Swampfire undergoing his "blossoming".

At some point, Transylians learned how to harness the lightning from Anur Transyl's giant storms with their own electric powers.[1] 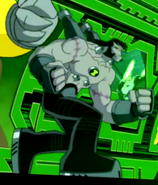 Nega Ben as The Electric Corpse 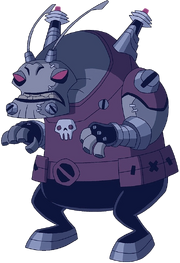