The Trans-Galactic Empire (aka, TGE) is an intergalactic empire in Palladium's Rifts Megaverse which was built by a warrior race, the Kreeghor and ruled from behind the scenes by the Lovecraftian-horror, The Dweller Beneath.

The TGE was established by the Kreeghor, a warrior race that was recruited by the Splugorth inter-dimensional conquerors to serve as one of their minion races. Unfortunately for the Splugorth, the Dweller Beneath an eons-old Eldritch being manipulated the Kreeghor into rebellion and secretly took control of the race. They then went on a war of conquest across the stars, expanding the "Kreeghor Dominion" and exterminating and enslaving many worlds.

Centuries ago they encountered the Noro Federation and Human Alliance, who were forced to joined forces and formed the Consortium of Civilized Worlds (CCW) as a defensive measure against Kreeghor attacks. Later the Kreeghor Dominion transformed into the Transgalactic Empire which continued its campaigns of expansion and eventually fought a great war with the CCW, that led to a cold war aftewards.

The Kreeghor are a humanoid race that looks reptilian with crocodile-like hide, a crouched posture, and long limbs which end in claws. It's a warrior race who have been conquering, killing, and destroying for 10,000 years.

Leading the uprising were super Kreeghor who appeared out of nowhere (secretly the creations of an alien intelligence (The Dweller Beneath). They not only slaughtered the minions of the Splugorth on their world but also killed the Splugorth lord himself. After 20 years of warfare, the Splugorth empire had enough and withdrew from that part of space. So far the Kreeghor are the only species that is known to have successfully rebelled against the Splugorth. There are three types of Kreeghor;

The Trans-Galactic Empire spans across the three galaxies in the cluster (Thundercloud, Anvil, and Corkscrew). It does not control any single empire, only controlling big parts of all three and competing with rival interstellar regimes, two of them inter-galactic. The empire controls 1000s of worlds with over 6 trillion sentients. Though it includes many races, a half dozen make up the vast majority;

True power in the empire is in the hands of the Dweller Beneath who lies under the imperial palace and pulls the strings of the empire, with the successive Kreeghor Emperors as his puppets.

What the rest of the empire sees is an autocratic empire ruled by the warlike Kreeghor. At the top is the Emperor who is assisted by the Privy Council (with up to a dozen members, all members of the Royal Family, and all equal to each other). The Ministries employ non-Kreeghor civil servants and there is much corruption, which the Kreeghor don't mind as long as the machinery of the empire continues to function. Military governors are in charge of running the planets, all of whom are fanatically loyal to the emperor.

At the top of the pyramid is the Royal Family. These are a Kreeghor sub-species, who possess a couple of super powers, including psionics. Members of the Royal Family are warriors, every single one of them. Sometimes they will adopt into their ranks famous or heroic imperial subjects. Royals command military assets and own property (estates and farms) that use slave labor.

A few races have been deemed worthy and accepted into the empire as near-equals. Among those races are the Wolfen (canine humanoids), the Silhouettes (a dark-skinned humanoid race), the Machine People, and some human worlds. All other races are treated as subjects of the empire or are slaves.

Though the imperial military is feared and hated by most, joining the imperial legions is highly sought after by the citizens of the empire. Being in the military gives you power and privilege. They can do anything they want, just as long as their victims are not the powerful or wealthy. If you are in the imperial legions you are paid well and receive generous pensions.

Citizens (subjects) are permitted to do anything they desire, except break the law, interfere with imperial activities, or anger/insult/embarrass someone of higher status. Most of them live in fear because a Royal Kreeghor can have them imprisoned or killed for a slight, and the military forces have a shoot first, ask questions later when it comes to policing, not caring about collateral damage, and having a well deserved reputation for torturing captives.

Slavery in the empire is legal. Most of them are prisoners of war, convicts, or descended from slaves. A citizen can sell themselves into slavery to pay off a debt. Slaves can also buy themselves out of slavery, if they can manage to save enough. The slaves work in the farms, mines, plantations, factories, and estates.

The armed forces of the TGE possess a frighteningly vast military machine. It's a well-trained, heavily-armed force that is mostly loyal to the Empire and its ranks includes members of every species in the empire.

The navy has 100s of thousands of starships including nearly 17,000 battleships (approx 2/3 of a mile) and a couple dozen city-sized dreadnoughts (3 miles long). It's ground forces have mecha and even a type of contra-gravity hover battlewagon that is as powerful as some warships. Resist the empire and the legions are sent to your city or world, to exterminate or enslave the population.

The most powerful class of warship in the imperial fleet are the 3-mile long Dreadnoughts. Which can survive a 70 Megaton nuke and it's laser cannons inflict in a volley damage equal to 12 Megatons. The mightiest vehicle in the imperial army is the Kartuhm-Terek, a multi-story super tank able to survive a 450 Kiloton nuke with laser cannons able to inflict in a volley damage equal to 200 Kilotons.

The TGE has access to advanced technology comparable to that of its rivals in the Three Galaxies. One of its achievements is bio-engineering super soldiers were super-powers, known as the "Invincible Guardsmen" who can be of any race. It's military possesses the following technologies; 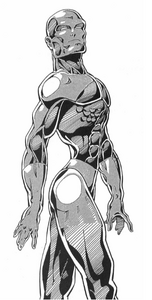 Machine People Race
Add a photo to this gallery
Retrieved from "https://aliens.fandom.com/wiki/Trans-Galactic_Empire?oldid=182023"
Community content is available under CC-BY-SA unless otherwise noted.