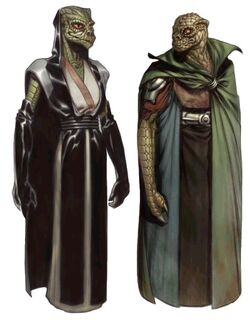 Star Wars
Trandoshans (T'doshok in their language) were large, bipedal reptilian humanoids from the planet Trandosha (or Dosha).

They had supersensitive eyes that could see into the infrared range and the ability to regenerate lost limbs, although very slowly, and were anatomically built heavier and stronger than most humanoids, including Humans. They would also periodically shed their skin. Unlike some other reptilian humanoids such as the Barabels and the Ssi-ruuks, Trandoshans had no tails. The Trandoshans were a warlike species who allied early with the Empire, taking Wookiees as slaves.

As a species, they were renowned across the galaxy for great strength. This is evidenced by several members of other species boasting physical prowess and power by having defeated a Trandoshan, either in battle or in a contest of strength.

Trandoshans were a large, bipedal sapient species, with scaly skin—which ranged in color from sandy brown to glossy green, which was shed roughly once every standard year. Cold-blooded reptiles, Trandoshans had two supersensitive orange eyes with horizontal black pupils, which could see far into the infrared range. Trandoshans could regenerate lost limbs and skin until they reached their Middle Ages—around fifty-four standard years. Each of their four limbs ended in three razor sharp claws, which although perfect for combat, they did not grant them manual dexterity, making a Trandoshan's finger movements somewhat clumsy and awkward. Though physically powerful, they were outmatched by their rivals, the Wookiees, in unarmed combat.

Trandoshans usually wore long capes and dark clothing, although the species' attire varied vastly. The infamous Trandoshan bounty hunter Bossk was known to wear a yellow flightsuit, something worn by several other members of the species. Trandoshan hunters and mercenaries usually wore either full body armor or a mixture of armor and cloth garb. Trandoshans also often wore warm jackets and baggy trousers. Their large, scaled feet also meant that it was impossible for them to wear any sort of baseline humanoid footgear, which could present impediment to hunting.

Trandoshans had a lifespan slightly shorter than that of most sapients in the galaxy. Considered younglings until they were eleven standard years old, Trandoshans were thought of as young adults until they reached the age of fifteen, when they became full adults. By thirty five standard years, Trandoshans were middle-aged, and those living past fifty were considered old. Any Trandoshan living over sixty years was thought to be venerable, and were greatly respected by society.

The Trandoshans originated on Trandosha, also known as Dosha or Hsskor. It was in the same star system as Kashyyyk, the homeworld of the Wookiees. In 7,000 BBY, the Trandoshans joined the Galactic Republic. During the New Sith Wars Sith troops landed on Trandosha, and the Trandoshans slaughtered many of the troopers. The Sith retaliated by invading their world and burning the homes of the Trandoshans, leading the surviving Trandoshans to save themselves from death by pledging loyalty to the Brotherhood of Darkness.

Prior to the Clone Wars, Trandoshan bandits invaded and occupied the planet of Jabiim before later moving on. At this time, Dosha was only indirectly represented in the Galactic Senate by the Wookiee Yarua, much to the Trandoshan's dismay. In response, Trandoshan terrorists attempted to assassinate Yarua in 32 BBY. In 23 BBY, a Wookiee vessel was attacked over a moon of Trandosha, resulting in a Wookiee blockade of Trandosha. Peace talks to resolve the issue were conducted 22 BBY and failed when it was revealed that the Trandoshans were pushing for Senatorial representation with Trade Federation backing. During the Clone Wars, some groups of Trandoshans involved themselves on the side of the Confederacy of Independent Systems in several engagements. One such example occurred more than one year after the onset of the Clone Wars when the Acclamator-class assault ship Prosecutor was taken over by a joint force of Trandoshan slavers and CIS battle droids. Later, the Trandoshans, with the help of CIS forces, invaded the planet of Kashyyyk to subsequently enslave the Wookiee natives. The invasion of Kashyyyk by the CIS led towards an expeditionary team of clone commandos being sent to Kashyyyk by the Galactic Republic, this act ultimately led to the Battle of Kashyyyk itself.

It was uncommon but not unheard of, that some Trandoshans were Force-sensitive. Because of their reputations as bounty hunters they weren't usually accepted as Jedi or even Sith; one exception, however, was the Jedi Lissarkh, a Padawan of Plo Koon. Normally they would use their Force Sensitivity to their advantage as bounty hunters.