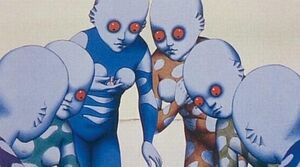 The Traags (French: Draags) are a sapient race of enormous humanoids (well over thirty meters tall) with hairless blue skin and spherical red eyes; which are native to the planet Ygam. They seem to live in nuclear family units, but their reproductive process is alien and not fully explained. They dedicate a great deal of time to meditation practices.

The Traags are many times larger than the Oms, which scurry over their planet. Despite realizing that the Oms originally came from another world, they don't consider the Oms truly sapient and tend to view them as pests, although many Oms are also kept as pets by Traag children. They also live much longer, and reproduce much slower, than the Oms.

Their technology is extremely advanced: they can create objects from scratch, miniaturize objects, and their learning devices allow them to upload knowledge directly into their brains.

The Traags' eyes appear to never blink but instead become pupil-less and change from red to blue when they are sleeping, in deep meditation, or dead. They may also be able to alter their physical form while meditating or sleeping, although the reason is unclear. Their blood is vivid blue in color. As they live much longer lives, they measure time differently than the Oms: a Traag week is roughly equivalent to a year for an Om.

Ygam's only natural satellite is referred to as the Fantastic Planet. During their meditation rituals, the Traags float to the Fantastic Planet inside transparent spheres, where they join with beings from another galaxy. Upon its surface there are several gigantic headless humanoid statues, which the Traags and their alien associates land atop inside their spheres, causing the statues to animate and start dancing. This curious ritual allows them to exchange vital energies which are necessary for the Traag reproduction.