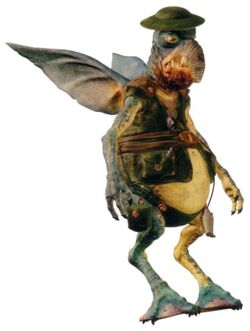 "I'm a Toydarian. Mind tricks don't work on me, only money."
―Watto

The Toydarians are a species of insect-like avian creatures from Toydaria. They're known for their bad attitude and greed.

Toydarians have stubbly trunks on their faces which rest above short tusks. They have three fingers on each hand. A Toydarian's thin legs end in webbed, three-toed feet, but their primary mode of transportation is their use of the wings on their upper back. Their wings can beat as fast as ten times a second, burning up large amounts of energy. Though their wings appear frail, Toydarians can fly quite rapidly and prefer flight to walking.

In order to fuel this hyperactive metabolism, Toydarians will eat concentrated foods and egg-seeds. Most bloodiest wars in their history were fought over food supplies. Their bellies are also filled with a buoyant gas which helps them stay aloft, thus creating the appearance of a pot belly. Despite appearing pudgy, Toydarians are actually one of the lightest races in the galaxy because their body tissue is spongy and gas-filled.

Their skin is usually gray or blue, although green and purple variants are common among females. The males of the species usually show sparse whiskers. Toydarian newborns emerge from their mothers' wombs fully developed, resembling miniature versions of their parents, and are able to fly from birth.

Toydarian government is a sovereign feudal system with one ruling king and many vassals. These vassals vie for power under the king's rule. The king makes sure to keep his vassals happy and to have their allegiance, but will occasionally encourage infighting to reveal the true character of the vassals and weed out treachery.