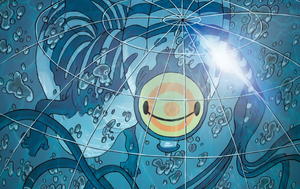 Infinity 8 Universe
The Tonn Shar are an ancient species in the Infinity 8 Comics and members of the Intergalactic Confederation.

Whale-sized creatures, resembling a plesiosaur with long thick tendrils that cascade from the back of its long neck. It face is quite peculiar, yellow and orange with black innocent looking eyes.

They open parallel timelines for eight-hour stretches, at which point they can either rewind back to the start or continue down that new permanent timeline. They are able to do this about eight times maximum.

The Tonn Shar are a very ancient species, with only about a hundred of them left in the universe. Due to their unique abilities the Intergalactic Confederation created Protocol 8, which allows ships that carry a Tonn Shar to gather as much data without possible to avoid wasting time and catastrophes.

Retrieved from "https://aliens.fandom.com/wiki/Tonn_Shar?oldid=173958"
Community content is available under CC-BY-SA unless otherwise noted.