Alien Species
Register
Don't have an account?
Sign In
Advertisement
in: Species that Metamorphosize, Herbivores, Carnivores,
and 7 more 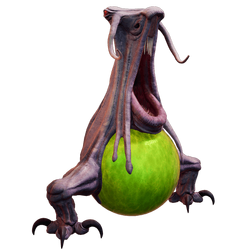 Eternal Cylinder
The Tonglegrop is the apex predator of the Savannah and final stage of Glossosphairium polymorphum.

Tonglegrops are fairly large predatory creatures. They have a set of wide-gaping legs, ending in three-toed claws spread to support their weight. Their body cavities are filled with acidic juices, which constantly secretes from its large mouth. Its eyes are situated behind the head, but it still seemed to have little issue knowing where it's going. Its upper jaw is lined with needle-like teeth, and whisker-like protrusions jutted out from its head.

They were initially mistaken for a seperate species than the Tonglegroplet and Glickbol, as it is vastly greater in size and has undergone several profound biological transformations. It has now grown an acid pump organ, allowing it to spit acid from a range at prey.

Like the juvenile Tonglegroplet, the creature is still bipedal but can roll around on its acidic ball to reach remarkable speeds and crush rocks and creatures in the way. Additionally, the Tonglegrop is now omnivorous, but it usually has a preference for meat.

The Tonglegrop's acid pump, which allows it to spray its acidic compounds, can be extracted by Trebhum from their corpses, giving them the same ability.

Extensive studies of this creature had revealed a very complex growing phase throughout its life:

After being gestated from an adult Tonglegrop as a larva, the larva eventually leaves and turns into this:

The youngest stage of this creature is called a "Glickbol", named due to its nature of licking the sides of its membrane. Although it doesn't have any limbs at this state, it is still capable of rolling around, albeit very lacking in control as it can only do this by pressing its tongue forward.

Its membrane is filled with a gelatinous material, which is hypothesized to provide nutrients to the creature until it can further develop. This is believed so since its membrane is fairly thick to avoid predation, and yet still too strong for the Glickbol to penetrate at this stage.

After growing large enough in size, the larva will now start to potrude out of the membrane, although it will still remain attached as a sort of sac.

This secondary stage, the creature is called a "Tonglegroplet". At this stage, it mirrors the fully grown Tonglegrop more extensively, but is still significantly smaller. It has developed a set of legs to walk, and its head is located at the front of the body.

Interestingly, the adolescence are actually herbivorous, and only able to eat fruits and vegetation with their long tongues. This is possibly due to its lack of sharp teeth or acidic juices, and is unknown as to why this creature alters its diet as it grows. One theory suggests that it is an opportunist, and has evolved to take full advantage of all edible materials as it grew into its full adult stage.

While they are harmless as juveniles, adult Tonglegrops are highly aggressive and will attacks numerous animals almost on sight, including its younger variants. While they're not exceptionally smart, Tonglegrops are still able to recognize the visual appearances of prey and enemies, and they usually rely on their strength and speed to quickly maneuver themselves across the environment To subdue their prey, they vomit up acidic juices on top of them, making it easier to overpower them. Smart Trebhum are able to use their aggressiveness against them, by leading two Tonglegrop to crash into each other, or leading them into the sight of a Celestial Trewhaala.