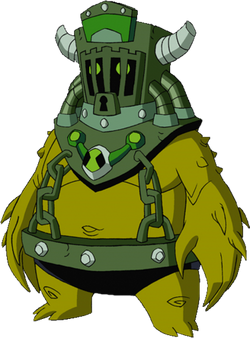 Ben 10
Toepick's Species is an unnamed ogre-like species from a dark planet that is not located in the Anur System.[1] They are considered to be the scariest race in the universe.

Members of this species are ogre-like aliens with yellowish-green skin, weed-like spikes on their arms, and pointed fingertips. Their faces are hidden behind metallic cages due to how horrifying they look to anyone who sees them face-to-face. These faces are supposed to resemble an eldritch horror and are covered by a layer of tentacles.[1]

This species has extremely horrifying and hideous faces that can tap into the primordial fears locked in all beings' subconscious and primitive brains.[1] Because of their hideousness, no one can look at them without being scared to the point of turning pale white.

If someone were to take a photograph of this species' faces, the picture would come out blurry. Nevertheless, it would still make people uneasy.[1]

The sight of their faces can cause adverse effects, the most common of which is the inducement of terror and insanity. Their faces can also induce nausea and counteract forces that feed on fear.

Other beings such as Humans, Argit's Species, any of the species living in the Anur System, Chimera Sui Generi, Chronosapiens, Appoplexians, Slimebiotes, and even Celestialsapien personalities and Ultimate Kevin[1] can be frightened by this species.[2]

In addition to their face, this species can bulge their eyes outwards[1] and produce horrifying sounds to induce extra terror. Whenever their helmets prepare to open, a small amount of green gas is released.

Beings with seemingly no emotions and feelings can experience headaches, disorientation, and other discomforts and confusions when in the presence of this species.[1][3]

This species has a type of layered multiphasic eyesight that makes their already mediocre vision even worse when looking at multidimensional or unknowable sights,[1] meaning that they cannot be frightened by their own faces if they were to look into anything reflective.

The helmets worn by this species are incredibly difficult to damage.[1]

This species has a degree of enhanced strength, enough to lift a car. Technically speaking, their strength is at a level similar to Earth gorillas.[1][4]

This species can shoot acid from their fingertips.[5]

Humans would find this species to be gross, as they smell like feet.[1]

This species is relatively heavy, meaning that they can easily lose balance. They also have below-average reflexes, making it easy for enemies to sneak up on them before they open their cages.

Beings that lack sapient emotion or survival instincts, such as drones and robots, would be immune to this species' fear-inducing abilities. However, it would invoke some sort of defensive reaction from them.[6]

Too much exposure to this species' faces can leave other beings scared to the point of being unable to eat or sleep.[1]

There is a limit to this species' strength, as they cannot lift anything bigger than a car.[7]

This species does not visit other planets, nor do other species visit their planet, because they are reclusive. It is currently if their native system is close to any space routs or not.[1]