None; created during cosmic storms

Ben 10
To'kustars are an "ultra-rare" race of gigantic aliens that are created in galactic anomalies called "cosmic storms".[1]

To'kustars are 120-feet-tall[2] (~ 36.5 m) muscular humanoids with four-fingered hands, stripes on their torso and legs, spots on their waists, blade-like growths on their shoulders, and stump-like feet. Some of them have a pair of secondary eyes protruding on their cheeks.[3]

To'kustars have pieces of armor made of an unknown cosmic material[4] that comes in different colors such as red, blue, orange, purple, and green.

Although they generally have a white base color for their skin with details in a primary or secondary color, To'kustars can come in different colors. For example, To'kustars from Dimension 23 have light blue skin and Evil Way Big has grey skin.

Mutant To'kustars (dubbed "Way Bads") have monstrous appearances, some of which resemble skeletons and share this appearance with undead To'kustars.

Surprisingly, the To'kustars' natural predator is an unnamed virus that is very small in contrast to their naturally gigantic size.[4]

To'kustars have extraordinary strength, even in proportion to their size, that allows them to defeat a normal-sized army with little effort. Technically speaking, they are strong enough to lift objects and creatures around their own size and hurl them into orbits from planets with an atmosphere as thick as Earth's.[2]

To'kustars are extremely durable thanks to their thick skin, making them resistant to most attacks and extreme temperatures. Because their natural armor has metallic properties,[4] they are also capable of deflecting a Chimera Sui Generis' optic lasers.

To'kustars can blast strong cosmic rays[5] powerful enough to disintegrate a small fleet of spaceships, destroy planets in one shot, and even harm a hybrid Celestialsapien such as Alien V by crossing their arms together. These rays come in different colors such as pale blue, green, red, and orange.

To'kustars can probably absorb cosmic energy to some degree.[4]

Due to the nature of their creation, To'kustars can survive in the vacuum of space.

A single To'kustar is powerful enough to destroy a small planet.[6] However, destroying a larger planet would require a squadron of To'kustars.[7]

In correlation with their origins, To'kustars can create and control cosmic storms, which can be used as both a habitat and a means of traveling through space.

To'kustars possess enhanced speed, and can leave trails in the same colors as their skin and armored parts. Additionally, To'kustars have a massive stride and can get to a destination quicker than other species.[4]

According to Tetrax Shard, a To'kustar's head fin is considered a weak spot. Attacking or damaging head fins can causing paralyzing pain to the To'kustar.

To'kustars can be incapacitated by electricity, such as bio-electricity generated by a Nanomite.

Despite their immense strength, To'kustars are physically weaker than opponents with a strength level as sufficient as Trombipulor's Species at full size.

To'kustars can be lifted off of their feet by a tornado generated by a Kineceleran. Certain beings can also lift a To'kustar with their bare hands, such Vaxasaurians at base size[8] and Evolved Vaxasaurians.

To'kustars can be affected by a pheromone generated by Gutrot's Species, causing them to follow whoever generates the pheromone around wherever they desire.

Like other organic beings, To'kustars can be aged to dust by the time rays of a Chronosapien or Chronian.

To'kustars have sensitive hearing, meaning they can be knocked out by Sonorosians if the latter gets up to their ears.[4]

To'kustars can be eaten by Gourmands, though they would first have to be chopped up into bite-sized chunks.[4]

To'kustars can be subdued by the Hephestan Neuro Grip, but only if this move were to be performed by beings with hands bigger than Slapstrike's.[4]

Normal To'kustars are nonviolent beings, and so are commonly known as "gentle giants". They live alone at the edge of the galaxy, silently guarding against threats from beyond.[4]

Mutant To'kustars are feral and will attack anything on sight. 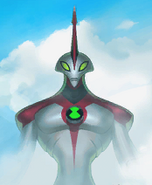 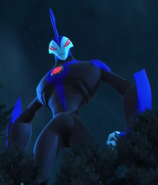 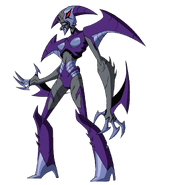 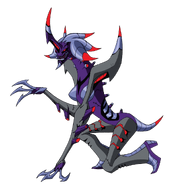