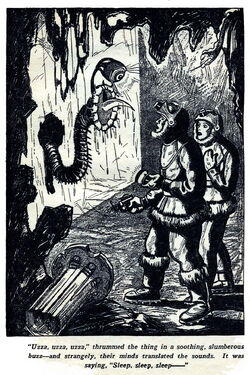 The Threadworms are a mysterious species of psychic vermiform predators native to the labyrinthine ruins that exist within the snowy mountain ranges of Titan. They're notable for having a single eyestalk as well as a single hollow fang, and for their ability to hypnotize their prey into a state of trance. It's not known whether they're fully sapient and whether they might be the ones who created the ruins in first place.

While little has been revealed about the biology of the Threadworms, it can be assumed that, being Titanian natives they're probably asexual and their bodies contain arsenic, as with every other life forms of their world.

Retrieved from "https://aliens.fandom.com/wiki/Titanian_Threadworm?oldid=182726"
Community content is available under CC-BY-SA unless otherwise noted.