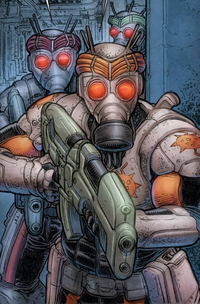 The Titan Patrol is a cosmic peacekeeping force in the Valiant Universe.

The Titan Patrol is tasked in enforcing both Unknown and Known Universal Laws. They maintain order with threat of immediate editorial strike through. When Atom-13 led the Brotherhood of the Bomb to Earth to rescue Sky Goddess from the thrall of the Cartographer, the Titan Patrol pursued them as the former had no clearance to leave Unknown space. Once they arrived on Earth the Titan Patrol attempted to arrest the Brotherhood of the Bomb, but before a fight could be initiated disgraced Colonel Jamie Capshaw informed them of a more pressing fugitive the Cartographer who was wanted by the Patrol for crimes. The Patrol and Brotherhood agreed to combine their efforts to target the bigger threat, however it was a ruse by the human in order to steal Unknown technology in order to regain her standing in the UN. Capshaw succeeded confiscating dangerous extradimensional technology whilst the cosmic entities fought and returned to the Unknown with their quarry.

They are cosmic entities that rival several powers from the Unknown. They tend to speak in literal censure jargon.

Retrieved from "https://aliens.fandom.com/wiki/Titan_Patrol?oldid=175565"
Community content is available under CC-BY-SA unless otherwise noted.