Alien Species
Register
Don't have an account?
Sign In
Advertisement
in: Quadrupedal Species, Created Species, Descendants of Man,
and 6 more 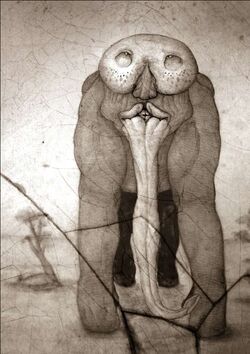 Created by the Qu from a colony of the Star People

Nemo Ramjet
The Titans were one of the posthuman species created by the Qu from a colony of the Star People.

Living on a planet with wide plains of savannah, these creatures had an elephant-like body plan with four feet, but instead of a trunk they used their elongated lower lip to manipulate objects. Their forefeet still had useless, stubby thumbs that showed their human ancestry.

Among the posthuman species created by the Qu, the Titans were among the most intelligent and showed a surprising level of dexterity despite their cumbersome body plan. Soon they began to carve wood, create giant buildings and developed agriculture. With the re-emergence of language, myths and legends formed from the rudimentary memories of their human past.

While it could be foreseen that human civilization could re-emerge from those creatures within a few thousand years, an ice-age wiped them out before anything like that could happen.