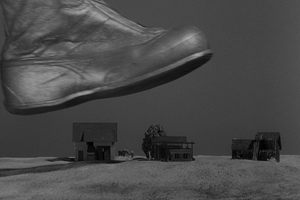 Unable to be seen by naked eye

The tiny aliens are a sapient species of very tiny beings, living in a canyon on an unknown rocky planet with two suns.

The biology and appearance of the tiny aliens are unknown, but when encountered by Humans, they were described as tiny people, and their technology appears suited for humanoids, implying that they are Human-like, or at least humanoid. They are able to work extremely fast, especially in groups, able to erect a statue several hundred times their size overnight. Their voices, when combined, are loud enough to be heard by a human. While described as being the size of ants, they are unable to be seen with the naked eye.

The tiny aliens appear to be living in a way similar to 1960s Earth. While initially unable to comprehend English, they were able to use mathematics to speak with a Human astronaut named Peter Craig, although they appear to have later gained the ability to comprehend English. They are understandably afraid of beings that are extremely massive compared to them, and are able to recognize a tyrant.

The tiny aliens reached an equivalent of 20th century technology, strikingly Earth-like in design, but scaled down to fit their size. They appear to lack weapons, or at least any that are capable of harming Humans.

Two Human astronauts, named William Fletcher and Peter Craig, land on an unknown planet with two suns in order to repair their ship. They had landed in a canyon, and Peter expresses his malcontent with his subservient position to William, when he suddenly hears the voices of the tiny aliens, although William does not hear it. Over the course of a few days, Peter goes out scouting, and comes across the tiny aliens, who live in a stream only a few centimeters in width, which would appear to be a vast river to them. Using his size as leverage, Peter forces the tiny aliens to hand over their resources to him for sustenance, such as their tiny trees and water from their stream, while also utilizing mathematics to communicate with them. William eventually finds out, and goes with Peter to the settlement of tiny aliens. Peter, now wishing to rule the tiny aliens as a god, begins stomping on their buildings, only to be knocked out by William amidst the sounds of panic from the tiny aliens. Later, Peter makes the tiny aliens construct a life-sized statue of him, something thousands of them worked together on to do overnight. Peter then forces William to leave by himself, wanting to stay behind and continue his rule over the tiny aliens, shooting the head off of his statue to intimidate William. After William leaves, Peter throws the broken head at the tiny settlement, causing more death and destruction among its populace. As he orders them to rebuild the statue, poised to step on more buildings, a deafening sound forces him to back away and makes the tiny aliens go silent. Peter recognizes the sound as another ship, telling the tiny aliens to stay quiet, until he hears the sound of something massive coming his way. Two giant aliens had arrived on the planet to repair their ship, towering over the canyon with Peter and the tiny aliens. Peter yells at them to go away, and one of the giants crushes him to death while picking him up to inspect him. The giants discard Peter's body back into the canyon before leaving. The tiny aliens rejoice, pulling down the statue over Peter's corpse.

Retrieved from "https://aliens.fandom.com/wiki/Tiny_Aliens_(The_Twilight_Zone)?oldid=198309"
Community content is available under CC-BY-SA unless otherwise noted.