"The oldest and most mighty race in the Universe, looking down on the galaxies below. Sworn never to interfere, only to watch."
―The Doctor on the Time Lords 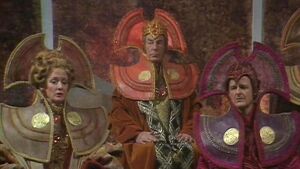 Protective, but often unwilling to intervene in most matters

The Time Lords (sometimes known as Lords of Time, or Gallifreyans and early in their history, Shobogans) are a sapient humanoid race from the planet Gallifrey, so called because of their ability to manipulate time and space through technology more advanced than most other civilizations. They are an extremely ancient and advanced race, and are believed to be the creators of time travel.

Members of this race may often share a symbiotic relationship with living, biomechanical spacetime vessels that are often known as TARDISes. The acronym, which stands for "Time and Relative Dimension in Space", was originally coined by Susan Foreman, but has been used by numerous other Time Lords as well.

Females of this species are sometimes known as Time Ladies (although the distinction is somewhat superfluous since they can all change genders when they regenerate) and the infants are sometimes called Time Tots.

"It's because I'm a Time Lord. For you, time is waves on a beach that you dip a toe into. For me it's a whole ocean, all the way from coast to coast and from the surface to the ocean floor. I feel time in the very core of my being in a way that you never can."
―The Seventh Doctor

Time Lords outwardly appear Human, but their internal biology is vastly different. Their life span can be counted in centuries, and they can heal from injuries fairly quickly. They have the ability to regenerate should they be mortally wounded. They have two hearts, which beat at approximately 170 beats per minute, and have an internal body temperature at 15 degrees Celsius. They also have a respiratory bypass system which allows them to survive strangulation, and are able to survive in a vacuum as long as they have an air supply.

Time Lords can communicate telepathically, though oftentimes this skill is boosted by their TARDIS, with which they share a symbiotic relationship. They can erase or block memories or information from an individual's mind through telepathic interaction. They also have a natural sensitivity to time, sensing the passage of time in a different fashion than Humans, as well as being able to see most of time; that is, perceiving the past, present, and all possible futures simultaneously.

A Time Lord's most distinguishing trait is the ability to regenerate their bodies when their current body is mortally wounded. This process results in their body undergoing a transformation, gaining a new physical form and new personality, but the same memories. Time Lords have been shown to have varying levels of control over what their next incarnation will look like, but the results are mostly random. A Time Lord can only regenerate twelve times before dying (giving them thirteen incarnations in all), though it's been confirmed that they can receive new cycles. The Master received a new set of regenerations from the Time Lords when brought back to life to fight in the Time War. It is unclear how long Time Lords can live for, thanks to their ability to regenerate. After regeneration, it is common for the Time Lord to be in a state of mental instability, confusion, and stress as he or she adjusts to a new body.

A Time Lord's consciousness is said to be "tied" to the Time Vortex, making them essentially clairvoyant. They can sense the passing of time, and are able to see alternate futures, as well as instinctively knowing which parts of time were "fixed" and which could be changed.

"Ten million years of absolute power. That's what it takes to be really corrupt!"
―The Doctor to a court of Time Lords.

The early history of the Time Lords is a closed guarded secret. Millions of years ago, a Shobogan named Tecteun became the first Gallifreyan to develop space travel and subsequently explored space. On a planet at the edge of the galaxy, she found a monument beneath an interdimensional portal. Beside this monument was a child whom she took to Gallifrey to raise as her own. During a fight with another child, the child falls off a cliff and dies but shocks Tecteun by regenerating, changing her body and personality. Tecteun then spent decades studying the child's ability and eventually found way to copy the ability onto herself and regenerated. Now a man, Tecteun gave this ability to the entire population of Gallifrey but limited it to twelve regenerations. The species quickly worked out time travel and rechristened themselves the "Time Lords".

Eventually, the Time Lords waged a great war against the Dalek race, an event which later became known as the Last Great Time War. Little is known about it, but it is said that "the whole of Creation [was] at stake", and that "the entire Universe convulsed". While unseen by the "smaller" species, the War was devastating to the "higher", time-sensitive races. The war ended with the destruction of Skaro (the Dalek homeworld), the loss - but not destruction - of Gallifrey, and possibly many galaxies and planets. Most of the Dalek race was wiped out, albeit temporarily, and all but two (known) Time Lords remain untrapped within an other universe; two renegades named the Doctor, and the Master. The Time Lords eventually made it back to the universe and situated themselves at the end of the universe to protect themselves.

Retrieved from "https://aliens.fandom.com/wiki/Time_Lord?oldid=185072"
Community content is available under CC-BY-SA unless otherwise noted.