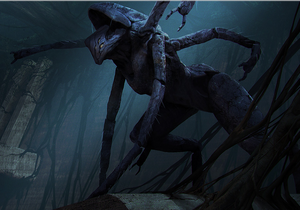 The Tikanan are a insectoid race in Endless Space.

The Tikanan are a lesson in the dangers of importing exotic wildlife. During the last century a small contingent of Tikanan were brought to the human splinter colony world of Abelard for purported "zoological reasons". A breeding colony of Tikanan escaped the lab block and disappeared into the wilderness, the human leadership played down the event, declaring that the unintelligent creatures would naturally die out. About a decade later, a hundred thousand Tikanan swarmed the human settlements, forcing the original inhabitants to flee. How they went on to evolve their own twisted civilization is uncertain, but what is clear is that they became much more adept than the mindless insectoids who'd arrived a dozen years earlier.

Retrieved from "https://aliens.fandom.com/wiki/Tikanan?oldid=172798"
Community content is available under CC-BY-SA unless otherwise noted.