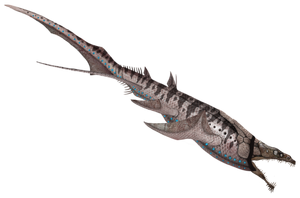 The Tiger Thresher is a large, predatory creature and close relative to the Coelanth.

Like their relatives, these predatory creatures hold resemblance to fish on Earth, in their case ray-finned fish thanks to their numerous fins along their sides. This, accompanied by the thicker scales on their heads, make them look like the armored fish Dunkleosteus, but this doesn't provide any visible protection. They get their name from the stripes running along their backs.

Their underbellies also have small, bioluminescent spots along their length, which are more visible within darker areas of the ocean.

While mostly found alone, there have been sightings of cooperative hunting with these creatures, found in pods of up to three individuals. Their diet consists of smaller creatures such as Crawlers or Mantises, and they have even been known to cannibalize their own kind if a live one comes across a carcass of another Tiger Thresher.

Retrieved from "https://aliens.fandom.com/wiki/Tiger_Thresher?oldid=165384"
Community content is available under CC-BY-SA unless otherwise noted.