The Thuum'ha (a.k.a. Ibians) are a green-skinned amphibious humanoid species which in ancient times inhabited the stone city of Ib, surrounding a deep lake in the land of Mnar, and worshiped the Great Old One known as Bokrug, the Great Water Lizard. They are described as having bulging eyes, flabby lips and strange ears, and have no verbal language. 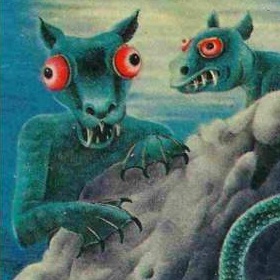 According to the brick cylinders of Kadatheron, the creatures descended from the moon in a mist, along with their city and the lake. Bothered by the creatures' wary rituals and disturbing appearance, the people of the city of Sarnath launched an unprovoked attack on Ib and killed all the inhabitants, dumping their bodies within the lake and stealing their idol of Bokrug. The following night the waters of the lake glowed with an unexplainable light and soon the Sarnath folks discovered that the idol had been stolen and the high-priest Taran-Ish killed, having written the word "doom" in the altar of his temple. Despite this, the city continued to grow over the years into a prosperous community, and each year they celebrated the destruction of Ib. Although the lake was occasionally seen glowing at night, no further incidents happened for the next millennium. In the thousandth anniversary of the slaughter, however, Bokrug finally launched its revenge and the Ibians returned from the waters, transforming the denizens of Sarnath into Ibians themselves and devastating Sarnath to such an extent that not even ruins remained behind.

Retrieved from "https://aliens.fandom.com/wiki/Thuum%27ha?oldid=132817"
Community content is available under CC-BY-SA unless otherwise noted.