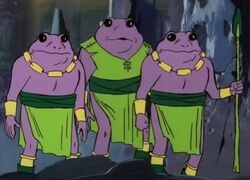 Lost in Space
The Throgs are the sapient inhabitants of an unnamed Earth-like planet located in an unknown part of the galaxy.

Throgs physically resemble bipedal anurans with purple skin and purple tongues. They stand slightly shorter than the average Human and considerably shorter than the Tyranos. Their hands have five digits, including an opposable thumb.

Despite walking bipedally, Throgs can switch to quadrupedal posture when they run. Like frogs, they can also move around at considerable speed by leaping.

Throgs are a friendly and non-hostile civilization, which live in villages. Their technology includes spears, and their houses are built in a shape similar to a toadstool.