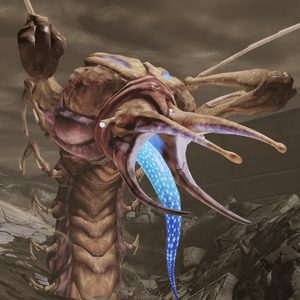 Thresher maws are subterranean carnivores that spend their entire lives eating or searching for something to eat. Threshers reproduce via spores that can lie dormant for millennia, yet are robust enough to survive prolonged periods in deep space and atmospheric re-entry. As a result thresher spores appear on many worlds, spread by previous generations of space travelers.

The body of a thresher maw never entirely leaves the ground; only the head and tentacles erupt from the earth to attack. In addition to physical attacks, threshers have the ability to project toxic chemicals and emit bursts of infrasound as a shockwave weapon.

The Alliance first encountered threshers on the colony of Akuze in 2177. After contact was lost with the pioneer team, marine units were deployed to investigate. The shore parties were set upon by hungry threshers, and nearly the entire assault force was killed. Alliance forces recommend engaging threshers with vehicle-mounted heavy weapons.

The human terrorist group Cerberus created traps to allow experimentation with Thresher Maws. This was usually in the form of an Alliance distress beacon that brought marines in.

Thresher Maws will be used to assist in the destroying the Reapers.

Retrieved from "https://aliens.fandom.com/wiki/Thresher_Maw?oldid=180359"
Community content is available under CC-BY-SA unless otherwise noted.