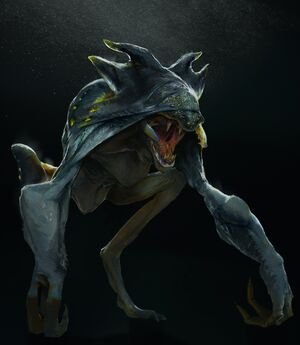 The Thresher is a predatory alien species that appeared on Earth after the Meteor Strike in 2031 in the Earthfall Universe.

Threshers appear much like a predatory primate. Its body resembles a primate, with elongated forearms ending in sharp claws to attack prey with. It has a set of horn-like crests on its head, the head and arms draped in a loose skin membrane. Its mouth appears reptilian-like with sharp teeth, with protrusions along each side of the jaw.

Threshers, much like Whiplashes, are known to hunt down prey. Threshers are extremely fast and relentless in hunting, often relying on ambushing their prey and lunging at them. It uses its sharp claws more than its teeth to tear into its prey.

Retrieved from "https://aliens.fandom.com/wiki/Thresher?oldid=170630"
Community content is available under CC-BY-SA unless otherwise noted.