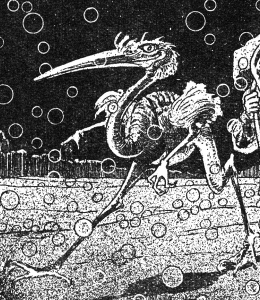 Tweel, a member of the Thoth species, illustrated by Frank R. Paul.

Stanley G. Weibaum
The avian Martians, a.k.a. Thoths, are a sapient race of Human-sized bipeds native to the planet Mars. Once a highly-developed civilization, they have since lost much of their technology and reverted to a quasi-barbaric existence. There is evidence that their thinking process is highly different from that of a Human, as some concepts which seem perfectly intuitive to one species will not be comprehensible for the other.

The Thoths' appearance has often been compared to that of a long-beaked ostrich. Upon close inspection, however, they bear only a superficial resemblance to Earth birds. Like all Martian life, they're asexual and their biology combines aspects of plants and animals.

In terms of overall anatomy, members of this species have a round body, long legs and neck, four-fingered hands, four-toed feet, and a comparatively small head with an 18-inches-long flexible beak. They also have something that resembles feathers on their faces, which can be used to protect eyes and nostrils during sandstorms. The beak is a soft structure, and has been described as being almost like a combination of beak and trunk. Their brains are located inside the abdomen. 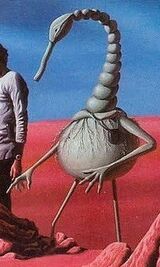 Thoths don't seem to drink water, at least not liquid water. When offered it, they might drink it, only to squirt it back afterwards. Although they don't sleep in the same sense as Humans, they spend the nights with their beaks buried in the soil, and it's been speculated that this might be their way to absorb nutrients, much like a plant, as all Martian life. Their basic biochemistry is carbon-based.

Due to the low Martian gravity, these creatures have developed a curious means of locomotion which involves hopping over several dozen feet and landing straight on their beaks.

Modern Thoths are a friendly and cooperative race. Their language is described as a series of clackings and twitterings. They wear no clothes, but may carry a bag hung about their necks. Despite looking rather primitive, they still retain knowledge of astronomy and their technology includes a kind of steam-propelled glass revolver, which fires poisoned darts. They use solar and chemical energy, but have never discovered atomic energy. Although fire is noted as difficult to make in the thin Martian atmosphere, the Thoths have developed something which looks like a perpetually bright piece coal and which can be used as a torch. It's also possible that they have built the Martian canals, but since they're not the only native intelligence on the planet, this is still disputed. In any case, they're known to care about the canal systems, even though they seem to have no biological need for liquid water.

Although the Thoths' language hasn't been translated, attempts to communicate with them seem to suggest that their thinking processes are highly distinct from Humans', as it appears that they never use the same word for the same object twice in succession. Instead each object has two names which are to be used alternately. Additionally, they don't seem to possess generic nouns like "rock"; only specific ones, for instance, to refer to large rocks or small rocks.

They're described as having evolved socially to the point where no government is needed; therefore their society is considered an anarchy. Rather than fighting each other over the limited resources of their planet, they cooperate to try to keep it inhabitable for as long as possible.

They are preyed upon by Dream-beasts and appear to have some kind of symbiotic relationship with the Barrel-beasts, as both races have been observed to cooperate in maintaining the ancient canal pumps working to provide water to the Martian soil.

Some Thoth cities are estimated to be about fifteen thousand years old, and possibly much older. Some of their art suggests that they have visited Earth in the past and made contact with the early Egyptian civilizations, which derived their own figure of an avian deity called Thoth from them.

Retrieved from "https://aliens.fandom.com/wiki/Thoth_(A_Martian_Odyssey)?oldid=201587"
Community content is available under CC-BY-SA unless otherwise noted.