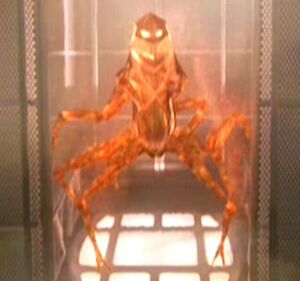 The Tholians are a reclusive, xenophobic spacefaring species native to the class-Y planet Tholia, located in the Alpha Quadrant, bordering territories of the United Federation of Planets and the Klingon Empire.

The Tholian body is enclosed in a semi-transparent orange crystalline exoskeleton, beneath which it is possible to see fluids in motion. Tholians have a somewhat humanoid torso supported by six thin, jointed arachnoid legs arranged in radial symmetry. They also have a pair of insectoid arms. Two shiny, pupil-less eyes (or possibly other sort of sense organ) are the only distinct features visible on their heads.

Tholians require an extremely hot environment to live, with temperatures over 450 Kelvin (177 °C, 350 °F) being considered ideal. They are able to tolerate lower temperatures only for brief periods, after which their carapaces will start to fracture. If exposed to very cold temperatures their body fluides will freeze and their body will shatter violently, perhaps a process analogous to what happens with Earth species when exposed to liquid nitrogen.

It is known that Tholians are hermaphrodite, although whether they reporoduce sexually or asexually is still up to debate.

The Tholian language seems to consist of series of clicks and chirps. Even with a universal translator, their voices will still sound like high-pitched computer voice. They are also able to communicate via radiation waves which they can produce and modulate.

The Tholian government is called the Tholian Assembly. Tholians are a very reclusive, territorial and xenophobic people. They rarely leave their territory and will aggressively attack those which enter theirs. They do have the habit of annexing surrounding systems to expand their area, though (note - this behavior has only been observed in the Mirror Universe).

Tholians also have a propensity for precision and are famous for their punctuality. Tholian silk is a very valued and hard to obtain product. It is currently unknown if the silk is produced by Tholians or from them.

Tholians made first contact with Humans in the 22th century. In the 24th century, the Federation was seemingly at conflict with Tholians, as Tholians destroyed a Federation star-base, with the only survivor being Commander Riker's father. Later, the Tholians were one of the Alpha Quadrant races to remain neutral during the Dominion War, signing a nonaggression pact with the Dominion.

Tholians were also one of the many species to become involved in the so-called Temporal Cold War, as they fought against the Suliban while trying to acquire future technologies.

The Tholians' most notable technological achievement is arguably the Tholian webs, energy filaments nets generated by specialized Tholian spacecrafts and used to immobilize an enemy vessel. The web's construction requires at least two crafts, but the process is a lot faster when done by several crafts. The web can be disrupted by destroying the ships creating the web before they finish.

In the Star Fleet Universe, the Tholians are actually native to the Messier-81, also known as Bode's Galaxy, which is outside our Local Group. The Tholian Assembly used to rule this entire galaxy, until they were overthrown by the insectoid Seltorians, after which some of the surviving remnants migrated to the Milky Way galaxy, with the Seltorians in pursuit.

Spinner-class, a small warship of the 23rd century from Star Trek, The Original Series.

Tholian, another one (Star Trek Online)

Tholian from Star Fleet Battles
Add a photo to this gallery

Retrieved from "https://aliens.fandom.com/wiki/Tholian?oldid=184755"
Community content is available under CC-BY-SA unless otherwise noted.