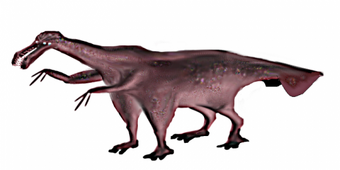 Thiogens are an extinct, sapient space-faring species in the Orion's Arm universe.[1]

Thiogen (plural: Thiogens) is the combination of the roots thio and gen. Thio- comes from the Greek word theion, meaning sulfur, and is a prefix used in chemistry to connote compounds containing that element.[2] The suffix -gen means "that which produces" when combined with another word.[3] Thus, the name of this species means that which produces sulfur.

No uncontested fossil of a Thiogen has ever been found, so any reconstruction is conjectural to some extent.

Nevertheless, it is known that a Thiogen was an amphibian or reptilian-looking creature, vaguely mimicking a small version of a sauropod. It was an hexapod, with two dexterous forelimbs and four legs, each with three digits.

The elongated head was provided with a sideways-opening snout and four eyes. The body ended with a balancing tail.

Thiogen biochemistry was silicon-based, using sulfuric acid (H2SO4) as solvent at temperatures of about 250 to 330 ºC. In-universe, this metabolic basis is named as vitriolic-world type or type IV xenobiochemistry.[4][5] The word vitriolic comes from oil of vitriol, the classical name for sulfuric acid.[6]

Since Thiogens drank liquids with sulfuric acid concentrations of about 98%, their metabolism was not based on organics alone. Instead, they used silicones,[5] alternating chains (polymers) of silicon and oxygen, with each silicon atom having two radicals. This would have given many of their molecules a formula of [R2SiO]n.

Nothing is known about Thiogen politics, culture or belief systems; except that they underwent a brief expansionist stage. In fact, as what happens with other extinct species in Orion's Arm, this knowledge will forever be lost to history, since there is no backwards time travel in-universe.

Though Thiogens did become a proficient technological civilization, they never rivaled the Terragen Sphere. Their knowledge of life sciences sufficed to terraform barren worlds, and their materials science could allow them to build acid-resistant alloys, ceramics and organic silicone plastics.

However, knowledge of physics did not rival that of the Terragen Sphere, since the Thiogens were never able to build megastructures or wormholes. Besides, there is no evidence that they used energy sources anymore advanced than nuclear fusion in their spacecraft; in contrast with the Terragens, which have antimatter and monopole-enhanced fusion.

Thiogens became an advanced interstellar civilization some 560 million years ago and became extinct shortly after,[1] during the Ediacaran Period on Earth. It is unknown what brought their end, and the evidence indicating weapon usage is inconclusive. As it is debatable whether old age is the only thing to blame for the decay of their infrastructure, some people speculate that the mythical Dawn Hunters wiped them out.

Retrieved from "https://aliens.fandom.com/wiki/Thiogen?oldid=170574"
Community content is available under CC-BY-SA unless otherwise noted.