"The thing we found was part Charnauk, queerly only half-dead, part Charnauk half-digested by the jelly-like protoplasm of that creature, and part the remains of the thing we originally found, sort of melted down to the basic protoplasm."
―Dr. Blair 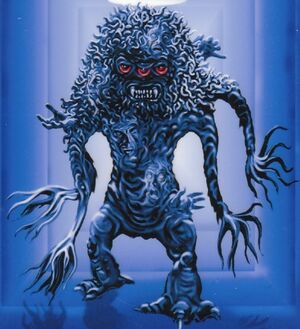 Prefer hotter environments; but can adapt to other conditions via shapeshifting

John W. Campbell
The Thing is the most common designation given to a sapient, shapeshifting, telepathic alien species which existed 20 million years ago, when one of their spaceships crashed on Earth in the frozen continent of Antarctica. They hail from a planet hotter than Earth which orbits a blue sun.

In their natural shape, members of this species are strange creatures with rubbery blue skin, three red eyes on their faces, and a myriad of wriggling worm-like tendrils which grow like hair on their heads. Their appearance, by Human standards at least, is considered grotesque, exuding malevolence and hatred. They're equipped with four tentacular arms, each ending in clusters of seven smaller tentacles like fingers. Their mouths have thin lips and snake-like fangs, and their blood is greenish-yellow in color.

The most notable aspects of their biology, however, are their shapeshifting, telepathy, and the ability to absorb, assimilate and imitate other life forms down to the cellular level, as well as mimic them in both physical and mental capacity.

The Things (a.k.a. "Monsters") are biologically unique in that, despite being complex organisms (not to mention sapient), their cells retain a lot of individuality and can remain alive and operate outside the context of the organism. This aspect of the beast's physiology allows it to return to life after being frozen in ice for 20 million years, and it's believed that even while frozen it remained conscious and capable of exerting psychic influence. They can also survive grave wounds, and it takes a lot to kill them. One member of this species survived having its skull split open with an axe, and only died after being torn apart by dogs and electrocuted by 220 volts. Another required a combination of multiple gunshots, axe wounds and incineration to finally perish.

Being intelligent shapeshifters, endangered Things can defend themselves by assuming a form most suitable for the environment they find themselves into, for example: turning into a dog to survive the cold weather of Antarctica for longer than they could in their natural shape; or into a formidable alien beast when attacked. They can also use their shapeshifting to pass through incredibly small spaces, such as squeezing under doors.

The cellular structure of the Things is similar to eukaryotic life on Earth in that cells consist mostly of protoplasm, and their shape and function is determined by the cellular nuclei. The difference lies in the fact that a Thing's nuclei can control the cells at will, transforming them into a perfect imitation of any life form that the Thing has been in contact with and/or consumed.

When it consumes another life form, the Thing gains access to that life form's genetic structure and can turn its own cells into perfect imitations of it. The life form is then absorbed and replaced with a replica, which is in fact a newborn Thing. It's not known whether this assimilation is the Things' sole method of reproduction or if they're also capable of reproducing sexually while transformed. The scientists who have encountered this species suspect the latter, believing that it could, for instance, turn into a female bird and lay eggs. 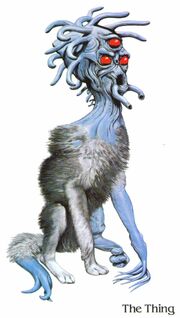 A side effect of their cellular plasticity provides for an effective means to tell whether a life form is actually a Thing in disguise or not. Once a small portion of a Thing's body (such as a blood sample) is separated from the rest, it will behave as an independent organism, and react to stimuli, e.g. a hot wire, giving away the fact that the blood is not blood, and the owner of the "sample" is in fact a Thing. This is the only reliable method to identify a Thing, for when it transforms, it also uses its telepathic abilities to behave exactly as it would be expected of the creature it is impersonating, thus drawing no suspicion. Their ability to read the thoughts of those around them makes them far more dangerous than the shapeshifting power alone.

Furthermore, the psychic abilities of the Things are not limited to reading minds, but also transmitting thoughts, which can be picked up by sensitive minds and manifest as dreams. People who have been in close proximity to this species might experience dreams in which they become aware of the creature's abilities, such as shapeshifting and telepathy, even if they were previously unaware of, and had no reason to suspect them.

Very little is known about the societal aspects of this species, although it's clear that they are highly intelligent, and collaborate with each other to deceive other sapients while trying to infiltrate and assimilate them.

They utilize spaceships to cross interstellar distances. Their ships' hulls are made of an unknown and highly magnetic alloy, which is extremely resistant, cannot be damaged by other metals, and is also impervious to acid. Their technical knowledge also allows them to build atomic engines and anti-gravitational devices. 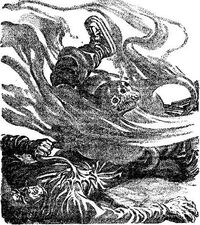 Retrieved from "https://aliens.fandom.com/wiki/Thing_(Who_Goes_There%3F)?oldid=195919"
Community content is available under CC-BY-SA unless otherwise noted.