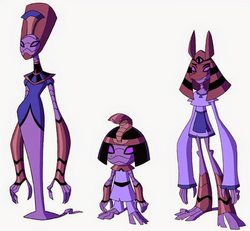 Ben 10
The Thep Khufans are a race of mummy-like aliens from the desert planet Anur Khufos in the Anur System.

Thep Khufans are mummy-like creatures composed entirely of organic bandages made from an alien material that feels like old cloth but have elasticity.[1] They have thousands of tendrils stemming from their hard yet removable heads.[2] Their bodies are thin, hollow, and humanoid-shaped with slight ape-like features on their limbs. They also have a pair of bandages dangling from their upper backs.

Being composed of bandages, Thep Khufans can reshape their bodies at will. This allows them to split themselves apart to dodge attacks, reform themselves to counter-attack, and generate more bandages for various needs.

A Thep Khufan's body is completely hollow, making them extremely flexible and allowing them to store things in their chest. They can also regenerate themselves if any part of their body takes damage.

Although Thep Khufans are frail, they possess a degree of enhanced strength, allowing them to punch away a Squid Monster with ease. Similarly, they can lift objects and people as big as a Segmentasapien with their stretchable limbs.

Thep Khufans can ensnare opponents with even the combined strengths of a Tetramand and a Vaxasaurian using their bandages.

Thep Khufans are rather durable, being able to withstand being thrown around by a Loboan and deflecting lasers using their bandages.

By reducing their bodies down to single bandages, Thep Khufans can slip through extremely tight spaces or small openings, allowing them to escape various traps or maneuver through cramped areas before reforming afterwards.

Because of their composition, Thep Khufans can breath underwater and survive in the vacuum of space.

Thep Kufans can probably fling themselves up in the air by grabbing two surfaces.[1]

Similar to Petrosapiens, Thep Kufans can extend their arms to superhuman lengths. They may also fold their hands like origami and shape them into weapons, though it would be like hitting someone with a paper Mache boulder.[1]

Like the other races in the Anur System, Thep Khufans are immune to the effects of Corrodium and can see in the dark.[1] Furthermore, they can contain pieces of Corrodium in their torsos, which in turn protects other beings from being mutated.

Thep Khufans can train themselves to perform magic similar to Egyptian curses.[1]

Thep Khufans can be tangled up in their own bandages. There is also an upper limit to how much tension said bandages can withstand before breaking.

Thep Khufans are incredibly light, meaning that can be easily blown away by strong winds. They are also very fragile, meaning that they can be torn to pieces.

Thep Khufans can be frozen by liquid nitrogen and semi-permanently destroyed by fire.

Despite being able to breathe underwater, Thep Khufans can become waterlogged from too much exposure to liquids.

Thep Kufans can experience fear in the presence of Toepick's Species.[1]

Thep Khufans live in deep, dark structures to keep themselves away from Anur Khufos' heat and wind.[2] They are one of several races under the command of the Ectonurites.

The more well-off Thep Khufans sleep in sarcophagi, while the poorer ones are unable to afford them. Therefore, sarcophagi are a kind of status symbol among the Thep Khufan wealthy elite.[1]

The Thep Khufans seen on Anur Transyl do not appear to be friendly towards beings from outside the Anur System and view them as monsters.

Thep Khufan clothing resembles that of ancient Egyptians, consisting of Wadjet headpieces on their foreheads that cover all but their noses and mouths, dhoti-like garments on their waists, collars, and cuffs on their feet and wrists.

Some Thep Khufans wear headdresses and tall hats that are somewhat similar to the Crowns of Egypt and the Nefertiti's Cap Crown.

Kuphulu is the leader of a Dagon worshipping cult on Anur Transyl. This is justified by his temple having tentacles running up the walls.[1] 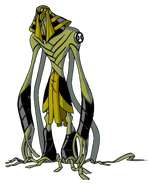 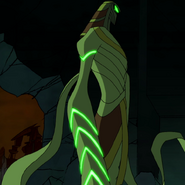 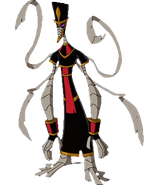