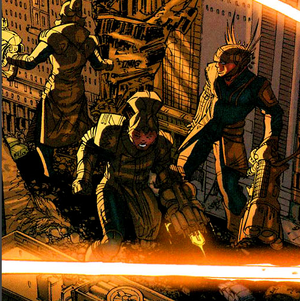 The Vigil are an interdimensional race from an older universe.

The Vigil are a race of red skinned giants, due to inhabiting a universe that has been expanding for about ten billion years longer than the contemporary one.

The Vigil were the first species to ever use the Bleed. As they explored the multiverse they gained a reputation of powerful ambivalent beings, respected by all life.

The Vigil were a highly advanced society, treasuring knowledge. They were a war free society for at least five hundred years. However when TAO manipulated the US government to launch an experimental vessel (using a black hole as power source) into the Bleed, it exploded and destroyed an Vigil ship. The destruction of Vigil shiftship was devastating to the Vigil as it was on a return trip to their home planet, bringing with it a millennium of information to be added to their main database and carrying a tenth of their population. This loss of information drove the Vigil to a full scale war against Earth.

When the Vigil have began their attack in New York, the Authority combated them. To sate their vengeance, Hawksmoor provides the Vigil with the person responsible for their plight, US President Patrick Kent. The Authority manipulated a video to use Kent as a scapegoat to appease the aliens, and to prevent him from indulging the truth executed the President before the Vigil. The Vigil though appeased left Earth disgusted of the Authority's brutal execution of Kent.

The Vigil are one of the oldest races in the multiverse, possessing immeasurable powers and resistant to magical influences.

Due to their prestige and power, many intelligent races see the Vigil in higher light, even attempting to attack the Vigil is viewed as sacrosanct. The Vigil are knowledge gatherers, their entire purpose is to secretly observe and record everything that happens in the multiverse.

The Vigil for the most part are a peaceful species, having never gone to war in their history.

Retrieved from "https://aliens.fandom.com/wiki/The_Vigil?oldid=168851"
Community content is available under CC-BY-SA unless otherwise noted.