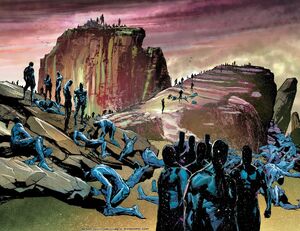 The Torment were an ancient race of cosmic giants in the Valiant Universe.

The Torment stood at heights near skyscraper proportions. They possessed humanoid bodies which appeared to be composed of the night sky with stars and galaxies. A single glowing star served as their eye. They were capable of reshaping their limbs into whips to defend themselves and emit laser blasts. In addition they were impervious to all sort of physical damage making them immortal. Internally, they were a dimension unto themselves , each Torment was psychically connected possessing a collective mind in which contained a fountain...no a sea of their accumulated knowledge that they gathered across the universe. Their method of acquiring knowledge was unusual as they did not study or observe to understand, but instead absorbed other lifeforms to experience their memories.

The Torment were an ancient species that roamed the universe for untold eons. They traveled to many worlds, absorbing what took to their interest and later unexpectedly leaving. The survivors of these visitations would refer them as Star Gods, and the Torment would be incorporated into their civilization's mythology as invincible gods and bringers of doom.

The Torment later came to Earth when the refugees of the Vine Empire and the Vostgoths began to reach its tipping point. The Vine recognizing the gods of their ancient past put aside their bitter grudges and united with the humans to drive the giants. Their attacks were fruitless as the Torment were immune to the violence and continued to devour the humans in New York.

However later it was revealed by Auric, X-O Manowar that the Torment never wanted to harm others, but that they were seeking to die. However they did not wish for their accumulated knowledge to be lost and thus sought a worthy vessel to pass it on. They were unsuccessful until one consumed Auric and he survived the transfer of wisdom, due to his bond with his Armor, Shannara.

Seeing that they found a worthy vessel, both noble and divine, the Torment willed themselves to death content that their wisdom was in the right hands.

While their name and the evidence of consumption of other lifeforms seemed to suggest some sort of maliciousness, to the contrary the Torment were merely innocently curious beings. They were unable to perceive themselves to being evil, seeing to their work as a way of gathering knowledge. In addition when the local sentient lifeforms attacked them rather than feel anger they were more or less confused on the aggression they faced. They accumulated a great deal of knowledge within their collective psyche, containing the memories and experience of creatures from the lowest insect, the brightest scientist, to the noblest of kings. However their name Torment was a curse to themselves has they sought to die, but were denied as they could not kill themselves until they could find a worthy vessel to ensure the preservation of their wisdom.

Retrieved from "https://aliens.fandom.com/wiki/The_Torment?oldid=175564"
Community content is available under CC-BY-SA unless otherwise noted.