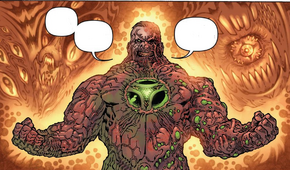 The Spore is parasitic alien lifeform of unknown origins.

The Spore is an alien parasite that travels through the vast coldness of space, infecting worlds on impact with the planet. Once the parasite makes planetfall, the Spore utilizes its tendrils to affect the roots of the planet causing global mutations on a planetary scale. The Spore's magnetic distortion field can hinder electronics.

The Spore was originally thought to be a viral outbreak with no sentience, however it was revealed on Earth to possess a will of its own, once it fully developed, capable of taking over consciousness and possessing a hive mind to coordinate attacks on the infected worlds.

Retrieved from "https://aliens.fandom.com/wiki/The_Spore?oldid=181459"
Community content is available under CC-BY-SA unless otherwise noted.