The Sphere's Species are an unnamed, endangered race of sapient mechanical spheres from an unknown destroyed planet.

The Sphere's species was created thousands of years ago, to help make their inventors' world better. At some point, their planet was conquered and harvested by a hostile alien race known as the Harvesters. The last of the Spheres, who carried the combined intelligence of her inventors and their entire race, managed to successfully escape prior to the planet's demise.

The lone survivor began traveling across the universe, encountering other species who had been defeated by the Harvesters and evacuating them in her gigantic ship. After establishing a Resistance against the Harvesters on an unknown planet, the Sphere arrived on Earth in 2016, 20 years after the Harvester's failed attempt to harvest Earth, to warn humanity about a second Harvester attack on their world. 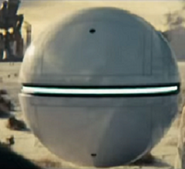 The Sphere
Add a photo to this gallery
Retrieved from "https://aliens.fandom.com/wiki/The_Sphere%27s_Species?oldid=159122"
Community content is available under CC-BY-SA unless otherwise noted.