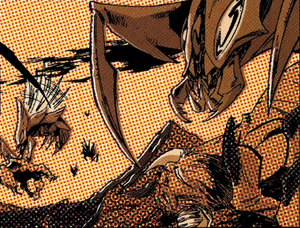 The Scourge was an alien menace that plagued the Civilization thousands of years ago in the Stan Lee Universe.

More than a dozen millennia ago, a dark cloud descended on the Civilization's homeworld, all but entirely blotting out the sun.

But it was soon discovered that the cloud was, in fact, an immense horde of metal insects, living machines that stood as tall as a full-grown man.

The Civilization did not know from whence they came or what they wanted, only that they destroyed everything in their path. Hence they were simply known as the Scourge.

The Human enlisted the aid of the Witches of Arbor and the Pride to construct a weapon that would overcome the alien menace.

Retrieved from "https://aliens.fandom.com/wiki/The_Scourge?oldid=181597"
Community content is available under CC-BY-SA unless otherwise noted.