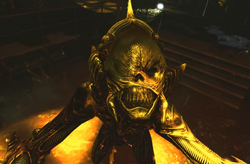 Alien
The Raven is a large and aberrant Xenomorph that was found in the sewers of Hadley's Hope, Acheron (a.k.a. LV-426), in the year 2179.

The Raven is the name given to a giant form of Xenomorph. Rumored to be a cross between a basic Warrior and a Lurker, its origins are very vague. The Raven is very large and covered in an almost impenetrable, spikey carapace that is tinted red. For this reason it can only be killed with a powerloader.

Most Xenomorphs prefer stealth when engaging marines, but the Raven will charge and give chase to even groups of armoured marines. Another unique feature is its visible and evil-looking eyes.

The Raven has a level of strength that is unmatched by nearly all aliens. Most of its attacks are capable of killing a Human marine in one hit and it can smash welded doors down on its own.

Additionally, whilst many Xenos produce various hissing noises and other high-pitched shrieks, the Raven possesses a loud and unique roar.

Even for a Xenomorph, the Raven is extremely aggressive. Pouncing on anything and everything on sight, then cocooning them for later, to breed more Xenos. It has been shown to attack other Xenos in the area, possibly showing a mutated or slightly insane side to its behavior.