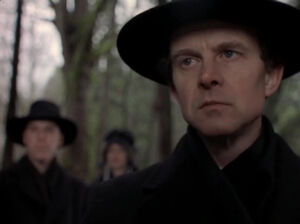 The Kindred are a group of extraterrestrial humanoids which settled on Earth at some point and built a community in Massachusetts. They notably have the ability to change sex at will.

Externally, the Kindred look indistinguishable from Humans, but are capable of changing from male to female and vice-versa. Apparently, even their DNA can be mistaken for Human. When they change sex, they become different enough to pass as a completely different person, which includes changes in height, weight and hair length.

When a member of the Kindred touches a Human of the opposite sex, they can release pheromones so powerful that the Human feels instantly attracted to them, even if they normally wouldn't find the individual in question attractive. Since the Kindred can change sexes at will, there's nothing to restrict their potential targets. During the sexual act, the pheromones they release are so potent, that they overcome the victim's body, causing death by coronary arrest and shock. Pheromones found in the bodies of the victims were estimated as being about a hundred times stronger than those found anywhere else in nature.

The Kindred can live for several decades without aging, and the lack of children in their community suggests they don't reproduce by natural means. They can rejuvenate themselves with a special type of clay which is only found in a specific area where the Kindred have built their settlement.

They might also be superhumanly strong, as they've been shown to knock out Humans with ease.

The Kindred present themselves as a very isolationist religious sect which shuns all modern technology; their lifestyle being comparable to communities such as the Amish. They refer to the outside society as a different "world", and may be punished if they have too much contact with it. Presumably, the reason for their isolationism and preaching abstinence is to minimize contact with Humans in general, and particularly sexual contact, which would lead to their exposure as extraterrestrials.

The white clay they mine from the hills is used both in their rejuvenation practices and to create handmade pottery, for which they've become well-known.

Since at least 1930 (and likely longer), the Kindred have lived within their own isolated community in the outskirts of Steveston, Massachusetts: the only place in the region where the white clay they use for their rejuvenation process can be mined.

In 1993, a member of this species named Martin became obsessed with the "pleasures" that the Human world could offer and started seeking out Humans. Over the course of two months, Martin alternated between a male and a female form continuously and killed several people, both men and women, by having intercourse with them. After the other Kindred apprehended him, they abandoned their settlement and left in a spaceship to parts unknown.

Retrieved from "https://aliens.fandom.com/wiki/The_Kindred?oldid=172293"
Community content is available under CC-BY-SA unless otherwise noted.