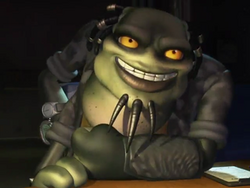 The League of Villains

This garbage salesman of an unknown species is known only as "The Junkman".

He was first encountered by boy genius, Jimmy Neutron, when he abducted him and his friends.

He's mean, greedy, evil and sociopathic. This monster literally sold his own mother just for a quick buck!

He's an obese alien that resembles a Yautja, although his mouth is more human-like, and he has an extra set of arms, and eyes.