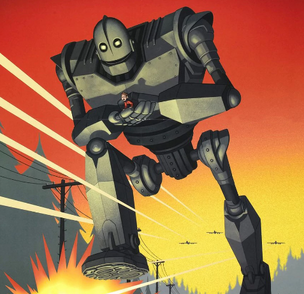 The Iron Giant's species are a race of robotic behemoths that originate from an unknown planet.

These robots stand over a hundred feet large and feed on anything that's metal which they use for fuel.

Very little is known about this such as where they come from and who (or what) created them, except that its implyed that they're some sort of war mechs and are programmed to destroy everything in their path.

They even self-repair themselves if when damaged, and have rockets within their feet which ables them with flight. This species is nearly indestructible as they can survive weapons like a nuclear missile.

Retrieved from "https://aliens.fandom.com/wiki/The_Iron_Giant%27s_species?oldid=185914"
Community content is available under CC-BY-SA unless otherwise noted.