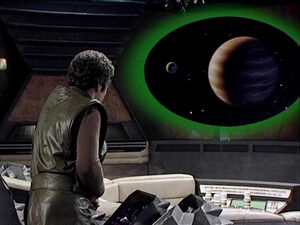 Blake's 7
The Host is a living world; a planetary life form consisting of a single non-sapient organism.

Its seas are composed of a digestive fluid akin to saliva. Its surface is inhabited by humanoid "parasites", which the Host can somehow detect, although the "parasites" can evade it by not staying on the same spot for any significant amount of time. Since it's easier for the Host to detect multiple "parasites" at once, they also prefer to isolate themselves from each other.

The "parasites" use their spade-like hands to dig into the Host's soil and feed on the living substances underneath. When the Host detects their presence, it can open up fissures on the ground to absorb the "parasites", turning them into food for the Host. It can cleanse entire landmasses by coating them with its seas of salivary fluid.

Retrieved from "https://aliens.fandom.com/wiki/The_Host?oldid=176641"
Community content is available under CC-BY-SA unless otherwise noted.