Alien Species
Register
Don't have an account?
Sign In
Advertisement
in: Ben 10 Universe, Characters, Creatures of Unknown Origin,
and 6 more 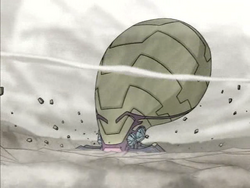 Ben 10
The Great One was a massive tick-like insectoid alien.

The Great One was a large tick-like alien with a small blue body and massive pale brown shell.

The Great One possessed a very durable shell, resulting in most objects being unable to scratch it.

The Great One's process of absorbing energy from the landscape would cause it to become poisoned, and eventually make the planet that he fed on implode. This would also cause the landscape to mutate as an extra defense, making him very difficult to attack.

The Great One was able to secrete slime while shedding his shell, which was shown to be acidic.

The Great One traveled from world to world, sucking the energy from them in order to feed itself. This process poisoned the worlds it visited to the point where they would implode. On top of that, it was followed by a group of worshipers (a leader, an interpreter, and an enforcer) who wanted to insure that it would complete its task.

The Great One was responsible for the complete destruction of the planet Arburia about a week before it tried to destroy Earth. It was eventually destroyed from the inside by Ben Tennyson as an Arburian Pelarota named Cannonbolt. This was a somewhat ironic accomplishment, considering the Great One was killed at the hands of a member of the species that it has tried to kill off.