"Perhaps the best way to describe it is a sort of formless, shapeless thing floating about in space like a cloud of mist, only with a mind and will."
―The Doctor 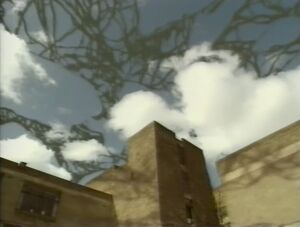 Doctor Who
The Great Intelligence is an evil disembodied intelligence originated from another dimension or universe, which can take over the bodies of Humans and manifest as a web-like material, while seeking out to transition itself into a definitive corporeal form.

Although its exact motives are unclear, the Great Intelligence seems keen on conquering Earth, and employed armies of Robot Yetis to try to subjugate humanity. These robots contain metallic control spheres inside their bodies, which provide a direct link to the mind of the cosmic being.

The Great Intelligence was defeated by the Doctor in Tibet in 1935, and again in London over thirty years later.

The physical manifestation of the Great Intelligence - outside of its control spheres and the people whose minds have been taken over by it - is usually restricted to creating a web-like material, which can be generated on land, sky or space, and is even capable of immobilizing a TARDIS in mid-flight. It seems to have some properties of a fungus.

Additionally, the Great Intelligence can also present itself as a slime-like fluid, a dense fog that can engulf and absorb victims, or even as information in a computer network.

In the 17th century, the Tibetan High Lama Padmasambhava made contact with the cosmic entity known as the Great Intelligence while astral-traveling. The Intelligence took over his body and kept him alive for centuries until 1935, using Padmasambhava's body to create an army of Robot Yetis. Once defeated by the Doctor, the Intelligence was banished from Earth, allowing the High Lama to finally die in peace.

More than 30 years later, however, the reactivation of one of the Robot Yetis provided the Great Intelligence with another opportunity to manifest itself on Earth and try to complete its transition into a fully corporeal form; which manifested as a web-like substance being generated in space and in the London sewers.

Once again, the Intelligence possessed a Human victim, in this case Staff Sergeant Arnold. This time, however, it intentionally lured the Doctor towards it with the ultimate goal of draining his mind and taking over his body. The Doctor, upon learning this, tried to reverse the process and destroy the Intelligence by draining its own mind instead, but the process was interrupted by Jamie destroying the Intelligence's control spheres to save the Doctor, which resulted in the Great Intelligence being simply banished from Earth again, but not destroyed permanently as the Doctor hoped.

Retrieved from "https://aliens.fandom.com/wiki/The_Great_Intelligence?oldid=186276"
Community content is available under CC-BY-SA unless otherwise noted.