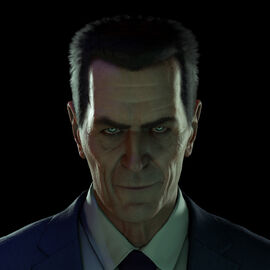 This eldritch and strange creature, known only as "The G-Man", has been encountered numerous times by Black Mesa employee Gordon Freeman.

His intentions and species are unknown, and his only known affiliations are his anonymous employers. All that is known is that he isn't human.

Retrieved from "https://aliens.fandom.com/wiki/The_G-Man?oldid=193403"
Community content is available under CC-BY-SA unless otherwise noted.