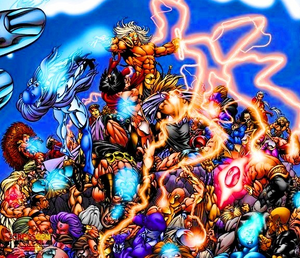 The First are a race of immortal beings and are considered the gods of the Crossgen Universe.

The First are immortals, capable of wielding the Universal Energies, granting them a wide range of abilities. They possess shapeshifting abilities to blend with other cultures.

The Transitioned Atlantean, Solusandra, was banished to the farthest reaches of the universe by the rest of her kind due to her emotions. To feign off loneliness she created Altwaal, the first of the First. She would later create six more of his kind so he would he would not suffer the same fate as she had and immediately left their world of Elysia after their creation.

Due to her departure and Altwaal's silence on their origins, these beings came to believe that they were self-created and the self-anointed gods of the Bright Universe. Naming themselves the First they would would create more of their kind that oversaw the Bright Universe.

Shortly after their birth, the Age of Wars began amongst the immortals, only to be stopped by Altwaal who became their King. After countless years of peaceful rule many of the First became dissatisfied with the status quo, and all for change in leadership, wishing for a council to govern their race. Alwaal considered his kind's wishes holding debates so that they may vent out their arguments, however these redundant talks only served to make some factions impatient and label Altwaal for assassination. The assassin accidentally killed Altwaal's love, Raamia, through the machinations of Tulity. Altwaal's loss caused him to break the laws of nature, resurrecting her and incited a new war of the gods for this blasphemy. War broke off between the First, bring countless worlds of the Bright Universe into the crossfire.

Altwaal as before ended the war, and divided the race into two societies on Elysia, creating the Eidolon Rift which divided Elysia into two houses, House Sinister and House Dexter. After that Altwaal banished himself until the First could grow without him overshadowing them.

The First continued their war between Houses more subtly using mortals as pawns to gain an advantage over the other across multiple worlds. Recently the First had begun investigating a new power that was emerging across their domains, the Sigil-Bearers, beings that possessed imaginable power that rivals the First and to which the First could not explain where it had originally come from.

Hoping to end the stalemate between the two houses, both factions attempted to curry and manipulate the Sigil-bearers.

The First are a very powerful, nearly immortal beings, who are each based on a single emotion. Originally seven First were created, and the later generations are are Secundae.

Retrieved from "https://aliens.fandom.com/wiki/The_First?oldid=175383"
Community content is available under CC-BY-SA unless otherwise noted.