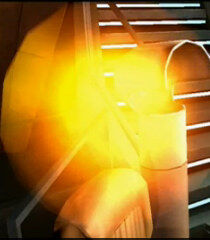 consume time energy from the past from its victims to make it so they never existed, time travel, non-corporeal

Sarah Douglas
The Entity is a sentient ball of energy that (much like the Weeping Angels) feed off of time energy from its victims. Unlike the Weeping Angels, however, the Entity doesn't feed off of the time energy of the future life it's victims would've led by sending them back in time, the Entity feasts off of the time energy from its victims past, making so as if they never existed. The Entity is known for having an insatiable appetite and could end the universe from the time paradoxes generated by the Entity's feasting and is said to be an old enemy of the renegade Time Lord known as the Doctor.

At some unknown point in time, the Doctor managed to find the Entity and contain it in a bottle-like prison (reminiscent of a genie in a lamp) until Amy Pond accidentally broke it while going through the Doctor's drawing room during a problem involving the TARDIS getting caught in a "space riptide". The Entity then began to feed off of Amy's time energy until the Doctor captured it again and gave it an ultimatum: be contained in the bottle for the rest of it's existence or feed of the energy of Chronomites (fourth dimensional, blue, space-borne worms that could renew themselves if their time energy was drained) that lived in the space riptide and never consume the time energy of any other species. The Entity ultimately decided to live off of the nourishment provided by the Chronomites as apposed to living in a bottle.

Retrieved from "https://aliens.fandom.com/wiki/The_Entity_(Doctor_Who)?oldid=181679"
Community content is available under CC-BY-SA unless otherwise noted.