Alien Species
Register
Don't have an account?
Sign In
Advertisement
in: The Blob Universe, Amorphous Species, Predators,
and 11 more 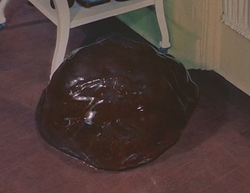 The Blob
The Blob is an amorphous, gelatinous alien entity that was brought to planet Earth trapped inside a meteorite. Nothing is known about its origins, the natural habits of the species, or how common they are in the universe.

This creature has no definite shape or size, being able to change its form at will. It quickly consumes all living things it can capture, digesting its prey chemically and growing more and more as it feeds. It also seems to be very fast and strong for a gelatinous organism that moves around by slithering. The thing was originally transparent white, but grew dark reddish purple from the blood of its victims.

Although there is no known way to kill a Blob, it is known that the beast stays away from cold temperatures, as they cause the Blob to solidify. It is not killed, though, and it will come back to life once the temperature is raised again.

The Blob fell from the night sky and crash landed on Earth near an old man's cabin in the woods. When the owner heard the impact and came to investigate, he saw a ball-sized meteorite still intact in the crater. Just when he was using his stick to poke the space rock, the meteorite hatched and the Blob-like alien emerged from inside. Intrigued, he used his stick to poke the alien and bring it closer to him. The Blob attacked him by crawling up and covering his right hand, attaching to him. The old man tried to remove it, but to no avail, and screamed in pain, forcing him to retreat back into the woods and run across the roads where he almost got hit by Steve's car. Steve and Jane picked him up out of the road and took him to Dr. Hallen's house. Steve and Jane quickly brought the old Man to Dr. Hallen, who sent the young couple to find any information about who the old man was and what was on his hand.

Several moments later, the Blob is shown to be slowing digesting the old man's arm and the rest of his corpse. When nurse named Kate arrived to check on him, the old man had already been absorbed by the Blob, who attacked and trapped the nurse in the same room. Hallen told her to throw the Trichloroacetic acid at the Blob to kill it, but the acid had no effect against the monstrous slime mold. Hallen go to his den and loading his gun while Kate begging him to come back. Kate tries to get away, but her foot got caught by the Blob's grasp and trip over the lamp, blowing the fuse and all the lights gone off. Hallen asked her what is it, but her answer didn't respond when he saw the Blob end up devouring Kate and becomes bigger than ever, and turns it attention to Dr. Hallen who fired his gun at the blob, the gunshot had little effect. Hallen close the door and locked it before he uses his phone to call for help.

Just as Steve and Jane returned, the Blob able to crawl under the door, into the room and atttack Dr. Hallen who trying to escape through the window when the Blob covered Dr. Hallen's body, consuming the trapped doctor alive and witnessing by Steve.

After the doctor devoured, the Blob escaped before Steve and Jane brought two cops, Dave and Bert over to Dr Hallen's place to investigate where they think those kids were vandalized the house when Mrs. Porter arrived while Steve try to convince them, but no one believes him. The Blob then enters the and devoured mechanic, bartender, janitor and every humans in its paths with until Steve and Jane located it in a grocery store. They fled, cornering themselves in a freezer where the monster refused to enter. It silently left its prey in search for an easier meal. When they managed to get the police to come again, the Blob was long gone and had found its way into the movie theater.

Later, the Blob consume several more people and grow into massive before trapped Chef, Waitress, Steve, Jane and Danny inside the dinner until Steve discovered the blob's weakness: Cold. The blob flees before end up frozen by citizens and firefighters using numerous of CO2 fire extinguishers. The Air Force send the biggest air-lifter and transported the frozen creature away where the plane dropped the frozen Blob in the Arctic Ocean.

Fourteen years later, the oil pipeline layer named Chester who return home after he brought a small frozen sample of the Blob where he uncovered by a bulldozer on a job site from the Arctic. Before taking the blob to a lab to be analyzed, he places the storage container with the blob in his freezer, but he and his wife had accidentally let frozen alien-like mass to thaw. As the temperature rise, the Blob awaken and starts consuming fly, Chester's cat, Chester's wife, and Chester himself.

After devoured numerous of animals and people increasing in size, it was eventually frozen again when Bobby activates the rink's ice mechanism. While the frozen blob is being filmed by a television crew, one of the crew's bright lights is positioned on the ground and accidentally thaw a small portion of it, which the alien-like oozes toward the sheriff and envelopes his feet as he is speaking on camera.

Early shots of the blob were achieved using a modified weather balloon.

In this unused shot, the character of the doctor is consumed by the blob.