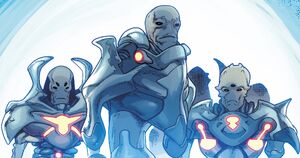 The Beyonders are a omnipotent (but not Omniscient) alien race that exist outside the Marvel omniverse (Basically living beyond all of reality,time,space, and the dimensions). They had first came to the attention of Earthlings (unknown if at this time to the cosmic beings) and when they hired the alien Sphinxor to steal the Counter-Earth for their museum of curiosities (Molecule Man during secret wars mentioned that they were more curious than a cat.) and that they were described to be like space scientists and creators of countless number of different universes to them they warped reality to certain extends and even the great living tribunal knew of their existence but did nothing until they attacked the Marvelverse the reason for this was because they did it on a "Whim" killing all the known cosmic entities and races which includes The Living Tribunal, the celestials, eternity, infinity, lord order and master chaos, and even the in-betweener on-panel doing it in every reality and all dimensions while the destruction of entire worlds happened. Its should be also to clarified that they used the Marvel Omniverse as a mere Nursery for their babies which is referred to as Cosmic Cubes like the Beyonder.

Retrieved from "https://aliens.fandom.com/wiki/The_Beyonders?oldid=180346"
Community content is available under CC-BY-SA unless otherwise noted.