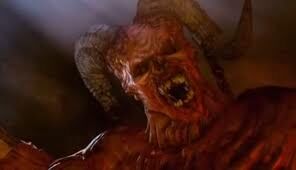 The Beast was a sapient being who was imprisoned in the planet Krop Tor supposedly "before time began". It had seemingly supernatural abilities, and was akin to (or possibly was) the Devil.

The beast was humanoid in shape, several hundred feet tall, could spit fire, and had horns.

It also had the ability to possess mutiple hosts. At one point, it was in control of several dozen Ood.

It claimed to be older than the universe.

Retrieved from "https://aliens.fandom.com/wiki/The_Beast_(Doctor_Who)?oldid=180213"
Community content is available under CC-BY-SA unless otherwise noted.