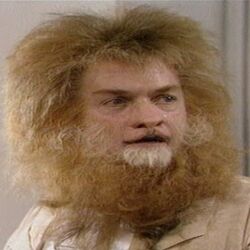 Doctor Who
The Tharils are a sapient humanoid-mammalianoid species of time-sensitives which can move freely through the winds of time. They were once masters of an empire that ruled over most of the galaxy, but have since been overthrown by their former servants and made into a slave race. They are now typically employed as navigators aboard ships due to their time-sensitive abilities. Although they are prone to attempting to escape into the Time Vortex, dwarf-star alloy is capable of containing them.

The heart of the Tharil Empire existed at the frontier between the realms of N-Space (the regular universe) and E-Space, and they used a gateway that enables them to travel between the two.

Retrieved from "https://aliens.fandom.com/wiki/Tharil?oldid=163529"
Community content is available under CC-BY-SA unless otherwise noted.